Cameras, Cameras at the park, who is the ugliest of them all? The Ugly 5.

Most of us are familiar with the Big Five and can even list them; Lion, Rhino, Elephant, Buffalo and the Leopard. Hence, when on safari we often find ourselves on the look out for the big five. Let me introduce you to another group of animals that you can be on the look out for on your next safari, the Africa’s less glamorous and infamous “Ugly Five”.

It is a member of the pig family. A warthog falls in this ugly five category because it has a face that is described as a mangled mess, has little tusks and has wispy hair that seem not to be that appealing to the eyes of many.

It sleeps in underground burrows and when in danger it choses to run rather than fight. At that point of danger, you will see them with a straight stretched tail so as to warn all fellow warthogs of the danger. Other than warning their fellow warthogs of danger the straight stretched tail is used by mother warthogs to helps their small piglets locate her easily in long grass. They are easy to spot on a safari and can be found in almost all parks.

Mention this bird to anyone and the first thing that comes in their mind is decay and death. A bird well known for feeding on carcasses of dead animals. The feeding habits of a vulture play a very big role in maintaining the ecosystem by preventing the spreading of pathogens.

This bird has a good eye sight that helps it locate food from as far as 1km. Quite impressive in size but not in looks, warranting it being listed as one of the ugly five animals to spot at a park. Though, it is a  beautiful bird while in the air with its broad wings and effortless grace.

Also know as Gnu, the wildebeest belongs to the antelope family and one could easily say that it received leftover pieces from other animals; a little bit of the horse, buffalo, antelope… you can call it the animal workshop. You can spot them at Masai Mara Game Reserve in very large numbers especially during the wildebeest migration that takes place annually between Serengeti National Park and Masai Mara Game Reserve in the Months of July and August. They can also be spotted at Amboseli National Park and Nairobi National Park but in small numbers. See our package for the beast migration

It is among the largest birds in the world and is also well know for being mean and its rowdy behavior especially when gathered around a carcass. A carnivorous bird that feeds on dead animal carcasses, ants, fish and even other birds like adult flamingoes. They are attracted to grass wild fires and will pace in front of the fire in order to grab any fleeing animals. Storks also associate with herds of large animals so as to feed on the insects.

Unlike other birds with pouches on their neck, theirs is not used for storing food but is used during courtship: the pouch connects directly to the left nostril and acts as a resonator allowing it to produce guttural croaking.

A hyena easily fits in this ugly five profile. Cute as a baby, but seems like growing up does not favor it as it looses its appeal. It is famously known for its vocals and laughing behaviors. The hyena is a carnivorous mammal that has very strong teeth than can crush the skeleton of a prey as big as a wildebeest. Spot the stripped or spotted hyenas at the different National Parks or Game Reserves during a safari.

There is a myth that hyenas are hermaphrodites. The truth is, spotted hyena females are bigger than the males and have a pseudo-penis. The pseudo-penis is paired with testicles (more like a fused labia filled with fatty tissue) and both sees get erections when they are excitedly greeting each other.

By the end of the day, beauty lies in the eyes of the beholder. To many people these animals are beautiful in their own way. On your next safari keep your eyes open to spot them and also take some photos. They also deserve some love.

What’s your take? Are they beautiful or do they deserve to be labeled as the ugly five? 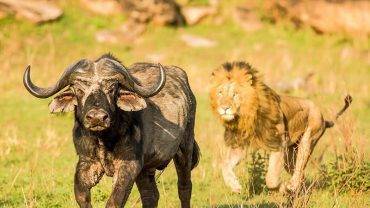 Democracy in the Wilderness